Joint Meeting of the 28th European Society for Microcirculation (ESM) and the 8th European Vascular Biology Organization (EVBO) in Pisa.

In immediate proximity to the leaning tower just short of 300 scientists and clinicians met in the Joint Meeting of the European Society for Microcirculation (ESM) as well as the European Vascular Biology Organisation (EVBO) in the auditoriums of the Polo Carmignani of Pisa University in order to discuss the current state of research, this biggest and at the same time most important part of the vascular system, the microcirculation.
On historic ground this event was pioneering. On the one hand it provided insight into the current research and its results; on the other hand most participants in the end were aware what importance microcirculation will have for the management of the future challenged in the health sector.
To an increasing extent it was also possible to get to know representatives of other organisations such as e.g. the IMIN, International Microvascular Net, who took the opportunity to find out about the topic but above all the resulting possibilities for cooperation for the establishment of future-oriented therapy and treatment concepts during this Conference.

Prof. Pier Luigi Cuolantoni /Italy opened this Conference and in an impressive talk gave insight into the research milestones of arteriolar vasomotion and the regulation of the microvascular flood flow. He showed precisely what findings were obtained since the first description by T.W. Johns in 1853. Decade-long research has illuminated a large part of the fog that has formed around this field and yet the most fundamental secrets remain: The precise information momentum has still not been well and truly explained, so that Prof. Cuolantoni conclusively acknowledged his remarks most aptly than with the sentence “Although the long story, the regulation of blood flow distribution is still under debate”
In the course of the Conference it was shown how important a further-reaching research effort is in order to unblock the last most important secrets from fundamental mechanism of action of the microcirculation and vasomotion in order to be able to develop and introduce effective therapy options. For the challenges of the future will not and cannot be overcome without this system. Considering that in in Germany, Austria and Switzerland already today 2000 patients and the health system are confronted with the diagnosis diabetes II as well as cardiovascular diseases for the first time every day. The resulting drastic microvascular changes that these, only these 2 diseases imply must be clear to each clinician and health economist that the microcirculation and blood circulation regulation of the microcirculatory networks will have an immanent if not primordial aspect for an effective and long-term health management.

Prof. Roy Huben /Holland put his finger precisely in this wound and pointed out precisely what nature these future challenges will have.
The microcirculatory flow motion influenced and controlled by the vasomotion shows different adaption phenomena in adipositas and hypertonia. In the course of a large-scale population study 10,000 test subjects (5000 type II diabetics and 5000 non-diabetics) whose cardiovascular risk factors have an influence on the microvascular flow motion were investigated. While the adipositas shows a demonstrable reduction of the vasomotion and through this also the flow motion, both factors increase significantly in hypertonia. In both cases an advancing deficiency of the adequate microcirculatory cellular organ supply in line with requirements is shown.

This cellular supply is not only indispensable for an optimal organ function, above all in the age and state of illness, but also for the endothelial function which certainly constitutes the basis for the vasomotion in the first place in order through them firstly to permit the flow motion to drain off.

Prof. Christian Aalkjaer presented the molecular function parameters which are significant for the triggering of the vasomotion.
The uncoordinated reaction of the endothelial cells are synchronised in a local depolarisation at a certain time and consequently triggers the endothelium-communicated tone regulation which can then be shown as vasomotion. It is shown here that the vasomotion is an autorhythmic, local phenomenon. In vitro the researchers have demonstrated that the stimulation of the depolarisation of the endothelial cells through chemical but also through physical stimuli can also be done through physical stimulations.

Currently, medicinal but also physical approaches to the therapy of vasomotion disturbances were discussed for the therapy-relevant obtaining once again of microcirculatory perfusion in line with requirements.

Medicinal therapy approaches currently constitute a main focus of research in order to restore a restricted vasomotion and yet they show themselves to be vulnerable in one important point. To be able to develop their effect they are dependent on the patient’s anyhow already restricted microvascular distribution mechanism and the corresponding receptors in the precapillary, arteriolar section. Currently, however, their lack of recipe constitutes a significant hurdle for an efficient medicinal therapy.

The BEMER ® physical vascular therapy appears to be the most promising approach here to close this therapeutic gap.
Through its physical mechanism of action and the demonstrated effect on a restricted vasomotion the Physical Vascular Therapy appears as an adjuvant therapy optimizer in the area of chronic diseases, which are accompanied by a reduction of the vasomotion and consequently of the microcirculatory flow motion, as an already established and highly efficacious therapy instrument for the challenges that will put increasing pressure on the health management, let alone place increasing strain on the patient’s personal restriction.

To meet the challenges of the future we must start to think about new effective therapy options. A future health management today can no longer overlook physical therapies such as the BEMER ® physical vascular therapy and deny this.
Therapy-relevant microcirculation therapies will be the key to a future health management in order to encounter the chronic diseases and their drastic influence on micro-circulation effectively in the long-term: In the therapeutic but above all in the preventive setting. 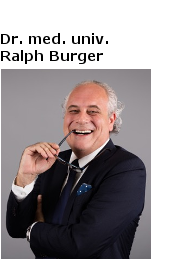