Microcirculation as the focus of public debate

Berlin/Mainz. 12/30/2014 Two evenings of discussions took place, one at Mainz City Hall and one at the Parliamentary Society in Berlin. Players and decision-makers from the areas of health policy and medicine, as well as the specialist public, were invited to both. 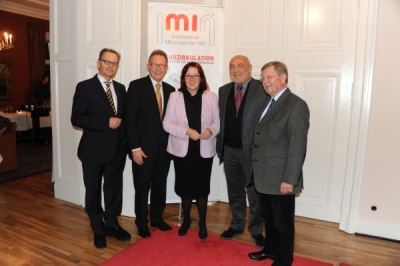 Quotes from the City Hall discussions:

Director of Angiology at the Krefeld Helios Clinic, noted that the number of chronic illnesses such as diabetes has increased significantly. Improved therapeutic care means that people can reach an advanced age, which is often affected by chronic diseases. However, since only large vessels can usually be treated with recanalization surgery, there is a significant demand for a method for the specific treatment of microcirculation.

Should studies demonstrate the effectiveness of the treatment, this would provide a sorely needed treatment option for vascular medicine.

noted that she considered Dr. Klopp's basic data to be convincing, but that a blind study should be used to show that physical treatment is even more effective.

closed the discussion at Mainz City Hall with a question to politicians: "What can politicians contribute to medical measures and how can the paradigm be shifted so that there is support for complementary treatments in addition to surgical intervention?"

State parliament delegate Dr. Enders answered: "Health policy can be compared to a high-wire act. Means are often limited and data must be verifiable. Nevertheless, politics is establishing the framework for the treatment and prevention of chronic illnesses."